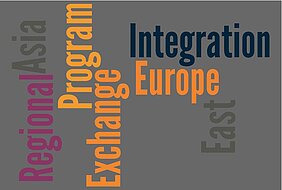 Exchange Program for Regional Integration in East Asia and Europe

Concepts of Nations
The aim of the “Exchange Program for Regional Integration in East Asia and Europe – EPRIE” is to promote and improve contacts between people of neighboring states whose relations, historically, have been troubled like between Germany, Poland and France in Europe and between China, Japan and Korea in East Asia. By comparing the situation of these regions in Europe and East Asia, dialogue between young people from Germany, France, Poland, China, Japan, and South Korea shall be promoted. The summer school provides the opportunity for an exchange of views to stimulate and foster the development of further cooperation and encourages network building.
EPRIE is aimed at participants from academia (master as well as PhD students and post docs in regional studies, journalism, history, political science, sociology, and educational studies), as well as young professionals (working in media, politics, economics or administration in private companies or public institutions). The program caters for 20 young people aged between 20 to 30 years. There will be three to four participants each from France, Germany, China, Japan, Poland, and South Korea.

Advanced M.A. students and Ph.D. candidates are invited to join in!