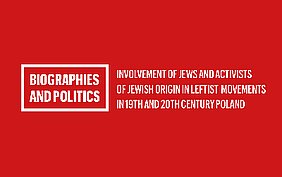 The involvement of the Jews of Poland in leftist political movements in 19th- and 20th-century Poland is a complex and challenging topic. Bundism or Labor Zionism openly combined Jewishness with leftist ideology. The situation is more complicated with actors of Jewish background in non-Jewish organizations, who at least partly did not consider themselves to be Jewish but were regarded as such by others. On another level, we cannot speak unequivocally about "Polish Jews" or "Poland" in the imperial era of the long nineteenth century, as other affiliations were also possible.

Nevertheless, the presence of Jews or actors of Jewish descent in these movements (social democrats, communist, leftist Zionists etc.), especially the prominent position some "Jews" held in the revolutionary movement and state socialism, has been an issue of public debate ever since. On the one hand, the myth of communist Jews as "Jewish perpetrators" was often and still is used to stir up anticommunist or nationalist sentiments. On the other hand, especially in western historiography the dominant narrative on the role of "Jewish" actors in leftist movements is one of an often disappointed struggle for political and social equality. It focusses on the failure of Jewish revolutionaries and Jewish communists as victims of Stalinism and communist regimes in East and East Central Europe. The persistence of these contrasting views deserves a thorough discussion and deeper academic reflection.

In our conference we will reach beyond such schematic conceptions. Instead we want to outline the actual involvement of Jews and activists of Jewish origin in the leftist movements of the 19th and 20th centuries from the perspective of individual motivations, ideological choices and personal biographies. To explore the different paths which led Jewish individuals to engage in leftist parties and organizations, we suggest approaching the topic from a biographical perspective. We thus invite scholars to present their findings on the formation of Jewish political identities based on biographical sources, especially ego-documents like diaries, personal letters, memoirs or oral testimonies.