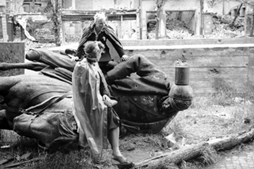 The projected conference deviates from the common practice to set a specific year or even day for the end of wars. Taking the example of Poland and its neighbors after the Second World War, it examines the end of war as a complex, long-lasting process with considerable regional differences, as well as variation in the experiences of individuals.

Starting from the assumption that there is a significant transitional period, we want to connect the analysis of lives after World War II to the war experience. This process requires looking backwards and forwards at the same time.

One focus lies on the reconfiguration of society in past and new Polish regions against the background of war, occupation, compulsory labor, genocide and forced migrations. A second theme addresses imaginations and concepts of law and justice after the traumatic experience of the deprivation of rights. Another section will look at efforts to physically reconstruct a heavily destroyed country, provide mental support to people, and establish a new social order. Finally we will enter the large field of emotions and uncontrollable actions, such as vigilantism and mass panic, linked to the war experience.

None of these fields is the domain of a single discipline. We therefore include contributions from history, linguistics, literature studies, law, sociology, anthropology as well as museology.

2. Past injustice - Imaginations and concepts of law and justice

The conference is conceptualized in cooperation with the German Historical Institute, Warsaw.

The Program can be found here

A conference report written by Zachary Mazur (Yale University) can be read here.