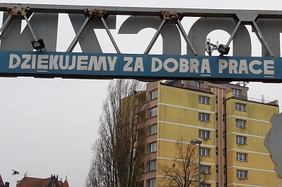 The biggest and most modern Polish Shipyard in Gdynia was closed down in 2009 after European Commission questioned the state support that the enterprise had received – mainly in form of bank guarantees - in the preceding years. This support had made it possible to maintain the production of big vessels for foreign investors, which had given the impression that the Polish shipbuilding industry had successfully transformed and adapted to the competitive global market. For many shipyard workers, including engineers and managers, it was hard to understand, let alone accept, that the shipyard’s unquestionable production success had not lead to sufficient economic performance, but to financial crisis and the collapse of the enterprise.

Many of the Gdynia Shipyard employees were frustrated with the closing of their shipyard and and downfall of the formerly state owned shipbuilding industry and blamed the government of Donald Tusk for insufficient support of Polish economic interests during negotiations with European Union. Those most active in the protests of the summer 1980, which had brought the social movement of “Solidarność” and had lead to martial law in the late 1981, started connecting the collapse of the shipyards with the Round Table “betrayal” of 1989, i.e., drawing a straight line between the starting point of Polish transformation and the shipyard closure twenty years later.

Protests in the Gdynia Shipyard in the year 1980 (and also 1970) were very widespread and intensive, indeed. They were also in some respects more radical, or less compromise oriented, than the much wider known protests in the neighboring Gdańsk Shipyard led by Lech Wałęsa. It was not an easy task to connect all the “betrayals” – those by Wałęsa and the “intellectuals” surrounding him in 1980, those by the “elites” in 1989 and those “by Tusk” in 2009 - into one “as if” historical narrative about a possible alternative Polish transformation led by “us”, not “them”; a transformation that would have led to another, much better Poland.

This story, kept on the margins of Polish politics for many years (but always visible from inside), started being actively used in the political mainstream starting 2010. Tightly connected to personal frustrations and ambitions, it changed into a new founding myth of the ruling party – and the Polish state as well.

Referring to my research experiences based on conducting biographical interviews with workers and engineers from the Gdynia Shipyard, I would like to shed light on the roots of this alternative, “empty” history of Polish transformation. I also want to use this particular case, to formulate more general questions about the complexity of the historical process and its narrative (mis)uses for current political fights.

In the seminar, we will together take a closer look at this phenomenon, including a possible discussion of parallels that can be seen  to obtain to  other "as if" narratives that play a role in current developments, arguably  ranging from Brexit over Trump to the rise of the AfD. Students who are considering to participate in the seminar are asked to send a short message to  p.filipkowski@karta.org.pl.